A unique floating exhibition centre built by Marketex Marine was inaugurated at the beginning of September. Titled “Salmon Eye”, the centre is located in the spectacular Hardangerfjord that is visited by thousands of tourists each year.

“For many years, Marketex Marine has contributed to the development of the Norwegian aquaculture — around 400 feed barges have been built and placed in Norwegian fjords over the last decades. However, this centre is unlike anything we have built before. I want to emphasize that the project was implemented precisely as originally visualized by Danish designers and Norwegian engineers,” pointed out Fjodor Kvitš, Chair of the Marketex Marine Board.

The inauguration ceremony was attended by Lauri Bambus, Estonian Ambassador to Norway; Kaupo Läänerand, Deputy Secretary-General for Maritime at the Ministry of Economic Affairs and Communications of Estonia; Sven Aulik, Head of Export Advisors Team at the Estonian Business and Innovation Agency; and Bjørnar Selnes Skjæran, Norwegian Minister of Fisheries and Ocean Policy.

“Estonian companies have repeatedly proven their exceptional competence and commitment to implementing complex projects for Norwegian customers. The opening of the Salmon Eye is yet another testimony to our friendship and partnership and will undoubtedly go down in the history of our countries. The fact of entrusting Marketex Marine with this project speaks for recognizing the competence and the level of expertise of Marketex Marine. The trust and credibility built by the Estonian companies with the Norwegian customers keep them motivated to perform their obligations while maintaining high quality and deadlines, which results in securing new contracts,” noted Lauri Bambus, Estonian Ambassador to Norway.

“The Salmon Eye project is a high-profile showcase of the Estonian maritime industry capabilities and, in particular, of the capabilities of Marketex Marine – the one that was solely and fully responsible for the construction of the floating exhibition centre. Furthermore, the Salmon Eye is a perfect example of international collaboration: the Norwegian concept of the unique project, the unparalleled Danish design and the exceptional Estonian implementation. The project also demonstrates that high-performance customer-oriented and tailor-made projects are a strong point of the Estonian maritime industry,” said Kaupo Läänerand, Deputy Secretary-General for Maritime at the Ministry of Economic Affairs and Communications of Estonia.

The exhibition centre is 26 m long and wide; its height is 15 m, and the overall weight is ca 1,000 t. The centre is a combination of a pontoon and an unconventional elliptical upper structure shaped to resemble a fisheye. The glistening exterior of the centre, akin to the skin of the salmon, is clad in 9,500 high-grade stainless-steel scales.

The Salmon Eye was commissioned by Fluctus, a Norwegian company, and is the first exhibition centre to introduce visitors to aquaculture development and the possibilities of sustainable fish farming. The floating tourist attraction will be open for visitors a little later this autumn and is only accessible by water. 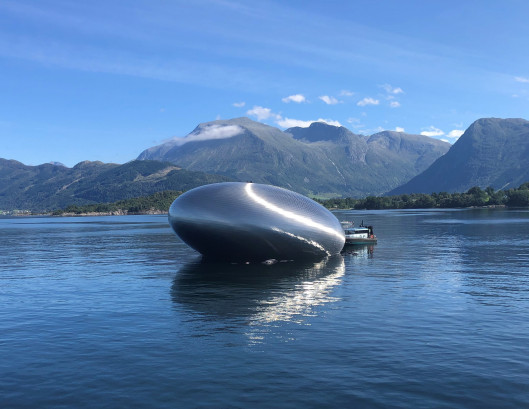